The cruellest spam and most outrageous slander against alcohol ever... PLUS a way forward proposed 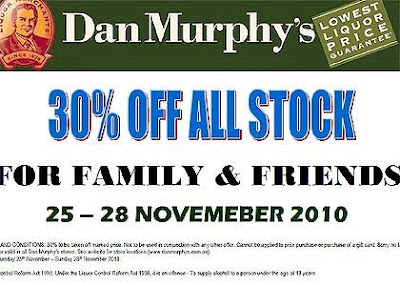 Liquor retailer Dan Murphy’s has been hit by a hoax offer that claims friends and family of the business can buy alcohol at a 30 per cent discount.

The Woolworths-owned liquor seller confirmed there is a flyer circulating online that advertises the fake discount. The retailer warned consumers on its website that the offer is not valid.

“To avoid any disappointment, please be aware that a hoax flyer is being circulated that did not originate from Dan Murphy's or Woolworths Ltd,” the company said. “THIS OFFER IS NOT VALID.”

A fucking hoax! The spammers have gone too far. There are some things you just don’t joke about and cheap booze is one of them. Not in this country. Not with this alcohol tax regime (combined with profiteering scum alcohol industry involving the likes of ... Dan Murphy’s).

What makes it so much more hurtful is that it is not as though this type of thing is not badly needed! The news is bad for alcohol on all fronts.

You read it, expecting horror stats of brain damage or inflated livers, but no... The risk?

There you have it, fellas. It is young women drinking that is to blame for men sexually assaulting them.

Really, young women should just fucking stay at home where they fucking belong and do nothing so unladylike as enjoy a fucking beer. And then men would not be tempted to rape them.

Now, does anyone else recall the flood of outrage when Sydney Muslim cleric Taj El-Din Hamid Hilaly made the following offensive comment about how women dress: “If you take out uncovered meat and place it outside on the street, or in the garden or in the park, or in the backyard without a cover, and the cats come and eat it ... whose fault is it, the cats’ or the uncovered meat?”

Consider this comment. The SMH reported that, in response to this study, “Trish Worth, chairwoman of DrinkWise, said there was a need for Australia to reshape its drinking culture”.

That’s right. Rethink its “binge drinking” problem. Because if there has been a rape, it is quite obviously all this damned drinking that is to blame.

It is like we have suddenly been transported back to the 1950s and the mainstream media is rehashing the plot lines of propaganda films such as “Reefer Madness!” — only instead of the demon weed we have FUCKING BOOZE!

Rethink its binge drinking culture? Here is a small suggestion from Carlo Sands, feel free to accept or reject it: How about ... you’ll laugh at this, no doubt it is just a silly thought but I’ll throw it out there ... how about ... just give it some thought ... rethinking a culture that allows men to think they can rape and sexual assault women???

I know. I’ve always been a radical. But don’t just dismiss it out of hand as the ravings of a mad Bolshevik. Give it some thought.

What about rethinking a culture that, when a young woman is assaulted, a study finds “victims of sexual assault were more likely to blame themselves and alcohol and exonerate men”.

Well, it is quite clearly booze’s fault, isn’t it, because the study says “young women often used alcohol to ‘transgress social norms’ of being female, then found themselves drunk and prey to the sexual advances of one or more young men”.

Right. Drunk and “prey” to sexual advances from men.

Carlo Sands is not now, nor has he ever been, a young woman. But I am going to take a stab in the dark and say young women don’t need to be drunk to receive sexual advances from “one or more young men”.

There is, of course, a difference between being prey to sexual advances that may be unwanted and actually being assaulted. And to be assaulted, a young woman does not need to be drunk or sober, just at the mercy of a rapist.

And if a woman is raped, it is not because they are drunk. It is because the rapist made the decision to rape them.

Now, why would a rapist do that? If I may go out on a limb here and make another radical suggestion (I know, I’m fucking sounding like fucking Trotsky addressing the fucking Petrograd Soviet on the question of storming the Winter Palace), but maybe the problem here is not how much the man who commits the assault has drunk, nor how much the woman who is assaulted has drunk, and maybe it is NOT ABOUT FUCKING BOOZE at all!

Maybe the problem is misogyny.

Maybe the problem is deep-rooted sexism in society and in our culture that gives too many men the assumption that women are objects to satisfy men, and they are, or should be, a man’s property, and they are beneath men and that men have a right to take advantage of them.

Both booze and the young women who enjoy consuming it are innocent. Young women who are sexually assaulted don’t bring it on themselves because of what they wear or what they drink. They have a right to wear or drink what they like.


“You can't knock em out, can’t walk away. Try desperately to think of the politest way to say, ‘Just get out my face, just leave me alone. And no you can’t have my number’, ‘Why?’, ‘because I’ve lost my phone’ ... ‘Please fuck off. No, it’s not going to happen, not in a million years’.” Lily Allen (with a great film clip made by young wommen at St.Angela's Sixth Form in east London) on the pressing question of how young women should, while out drinking, deal with arseholes making unwanted sexual advances. Presumably, SMH thinks whatever the arsehole may or may not do, the young woman in question had it coming, what with the explicit setting of this song in a pub and everything.

Beyond my heart attack-inducing rage at the SMH piece, my point is: this is is just the latest, if one of the more offensive, series of attacks on drinking. It all works to creates the atmosphere for such proposals as the one from the City of Sydney to close all pubs at midnight.

The result of all of this? Media and government hysteria notwithstanding, the tragic news has come through: Alcohol consumption has dropped for the fourth running year, the Australian Bureau of Statistics has reported.

It is in this context that this fake offer has been made. It is undoubtedly cruel to get drinkers’ hopes up in such a way, only for them to be so horribly dashed after a drinker has made the effort to stagger or crawl to the nearest Dan Murphy’s bottlo.

But let us not only blame the spammers. Much responsibility lies with Dan Murphy’s too. The prices in these liquor stores are too high!

It is ridiculous, the way beer prices, especially, are going through the roof.

I know the capitalist gangs in control of liquor production and distribution will blame the government’s taxes. And they have a point — they are ridiculously high. Why should our livers pay for their system of corporate welfare and the privileges of the bureaucratic and political class?

But, if that is solely to blame, then I ask here, before the world, why will these liquor giants not open their books and allow society to see for themselves their profit margins?

In a matter so crucial to society’s function as access to alcohol, society must be in a position to ensure it can be accessed in a fair manner and not left to the whims of those whose minds are only on profit, not on the drinkers’ well being.

Let us collectively decide what would be a reasonable return for these companies!

And any company in the liquour industry caught abusing their position and engaging in excess profiteering should be NATIONALISED and WITHOUT COMPENSATION! Then we can begin to create a network of alcohol production and distribution under collective control and for the collective interests of the drinkers.

If one good thing may come from this cruel trick, let it be that these questions are posed before society.

In the meantime, Carlo Sands blames both the spammers for raising false hopes, and the liquor giants and government for creating a situation so unfair that these tricksters can prey on our hopes and dreams. To all of them, I dedicate the following song by a group of Welsh rock legends...

“But there’s no — no truce with my fury... you stole the sun from my heart.” Carlo Sands saw the Manic Street Preachers play on Monday and they rocked. They played this song and Carlo Sands jumped around almost as much as a much mascara-ed Nicky Wire.
at 11/18/2010 10:49:00 am