Could this be the wall? 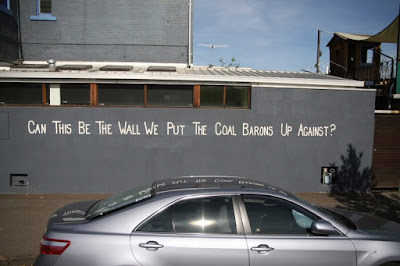 “Can this be the wall we put the coal barons up against?”, is the thought provoking question from Fitzroy, Melbourne. It poses a very important question indeed.

Too often, the great mass of the oppressed go into a mass insurrection, driven by hatred of an outmoded social system that condemns their lives to utter hell, without fully thinking such questions through.

Too often, essential questions such as that posed by this piece of graffiti are not answered in advance. The result is ad hoc solutions are found.

Well, no need this time.

We know who is responsible for the coming eco-holocaust. And we know what needs to be done.

And we have concerned citizens thinking ahead and putting in their bid.

So, to the question posed: *Should* this, indeed, be the wall?

Well, I decided to investigate for myself. I went down to Melbourne, took the 86 tram to Fitzroy and found the wall in question in order to carry out a thorough study.

The conclusions drawn from my investigation are mixed.

In short: the wall is adequate. It is definitely high enough and has a reasonable length, so as to ensure a relatively efficient process

However, I would caution against any rushed conclusion that views this particular wall as *the* wall.

For a start, while relatively long, it is far from *long enough* to line up all the coal barons and associated hangers on — such as the entire parliamentary grouping of the NSW ALP, to say nothing of the editorial board of various Murdoch tabloids.

If this is the *only* wall, it may take some time to get through them all.

It seems to me, if this is to be done in a relatively short period of time (and climate scientists keep emphasising that the time in which to act is short), then more than one wall is required.

This wall may well prove useful for those traitors to humanity as can be rounded up in Victoria, but further walls should be investigated for use in other key regional areas.

Those of us in Sydney have a particular responsibility, I feel. Even more so those in Newcastle.

In short, Carlo Sands wishes to congratulate those in Melbourne who have thought ahead and found a wall *before* the mass insurrection that condemns this fucking insane fucking system — that fucking threatens fucking destruction of all fucking life on fucking earth so a few fucking corporations can fucking earn some fucking unimaginable fucking profits — to the fucking dustbin of fucking history.

But, the rest of us should not take this as a signal to rest on laurels.

This wall is merely a good start. Many more will be needed. Time to get scouting.