As you well fucking know, I have the greatest fucking respect for you as fucking rulers of the United fucking States and legitimate fucking leaders of the free fucking world and your self-a-fucking-ppointed mission to fucking bring fucking civilisation, fucking democracy and Mc-fucking-Donald's to the whole fucking world.

One that fucking allows its free fucking citizens the fucking right to be fucking evicted from their fucking homes because the fucking banks fucked up the entire fucking economy.

However, it has fucking been brought to my fucking attention that in the fucking pursuit of these fucking goals of fucking making the fucking world a free fucking territory for your fucking corporations, fucking atrocities are being fucking committed on a regular fucking basis all over the fucking place.

I, of course, fucking refer to the fucking video fucking released of some fucking democracy promotion fucking activities by your fucking liberating fucking soldiers in fucking Iraq.

It fucking appears this is not fucking unique.

What is fucking more, it hardly fucking stops there. There are the fucking large fucking number of fucking stories of fucking civilian massacres being fucking committed by your fucking troops in fucking Afghanistan.

And then fucking claiming they are fucking terrorists so it is all fucking right.

Then there is the fucking case of fucking Honduras, where the fucking regime fucking backed by you is fucking organising fucking death squads to carry out a fucking reign of fucking terror against unarmed fucking opponents. 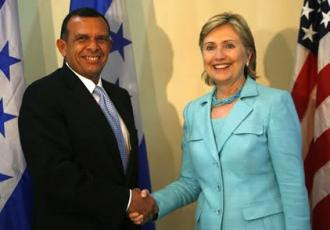 It isn't that I fucking don't believe you that such fucking “tragedies” are merely a few fucking “regrettable” fucking incidents. It is merely that I fucking wish to give you some fucking advice.

And one fucking day every fucking one of you fucking motherfuckers fucking responsible will be fucking hauled into a fucking court room to hear your fucking judgement.

And if I should fucking meet any of you motherfuckers late at fucking night in a fucking alleyway, I have a special fucking message to give you.

Email ThisBlogThis!Share to TwitterShare to FacebookShare to Pinterest
Labels: fuck you