'Is Clyde an existiential threat to human civilisation?' and your other questions answered 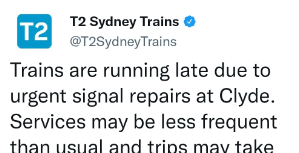 Since the release of my short-yet-informative documentary Granville: A Tourists Guide -- funded by the Granville Municipal Council -- I have been indundated with correspondence centred on one topic: Clyde.
My film featured much useful information for tourists seeking to visit Granville, part of the Cumberland Local Council in Greater Western Sydney, yet it was my attempt to infilitrate the neighbouring suburb of Clyde that has so clearly captured the public imagination.
And fair enough! Clyde is baffling and terrifying in equal measure! A suburb with an official population of 9 yet with its own train station??? You are RIGHT to demand answers!
I have already "blogged" (as the kids say) on the matter of Clyde before, here and here. But this is a big topic, arguably the most important issue facing humanity, so I will do my best to answer your questions below:
***
Why does Clyde exist?
That's one for the philosophers. But at a guess, I'd say because God hates us and wants us to suffer.
What is the true population of Clyde?
That depends if you believe the official ABS stats: 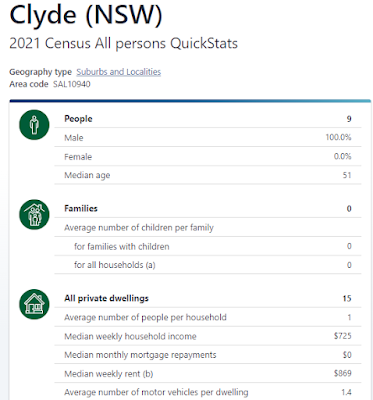 This is their serious claim from the 2021 Census! That there are 9 people living in Clyde who are ALL MALE (what is this place, Jordanpeterstan???) YET there are 15 private dwellings??? That's 0.6 MEN per dwelling!
The official story makes zero sense. They must think we're fools!
So how many people REALLY live in Clyde?
That I cannot answer. All I can say is I have seen with my own eyes MANY people get on and off trains at Clyde Station. I can safely say that NO ONE who resides in Granville and is EVERY DAY delayed by 2 or 3 minutes on their train trip home from work believes the official story. It's called "lived experience".
What do you think they are really doing in Clyde then?
I have no idea and it would be wholly irresponsible to speculate. But my guess is there's a secret underground suburb, hidden away from prying eyes, doing GOD ONLY KNOWS WHAT EVIL.
What should be done about Clyde?
I have said it before and I'll say it again. We MUST invade and occupy Clyde. The UN Security Council must stop sitting on its hands and immediately authorise a multi-national military force to take control. Clyde is an existential threat to human civilisation on a scale that makes climate change seem like a collective stubbed toe. Future generations will not forgive inaction.
ACT! ACT NOW OR BE CONDEMNED BY HISTORY!
Thanks to everyone who got in touch!
at 11/30/2022 08:02:00 pm

Email ThisBlogThis!Share to TwitterShare to FacebookShare to Pinterest
Labels: Clyde