Christmas is one of those things you can't actually stop, so you might as well write decent songs about it. I gotta say, though, as we are on the topic, my Christmas came early -- on December 23 when the whole of Wanderland was jumping and singing as the Western Sydney Wanderers demolished the Central Coast Mariners, who had the sheer *gall* to beat us in last season's grand final. 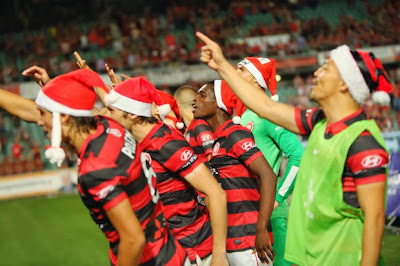 The *true* meaning of Christmas! Wanderers players celebrate with the fans after their 2-0 defeat of the Mariners! Check out Shinji Ono's hat! Christmas is red and black!

But you know, not everyone was at Wanderland in Parramatta on Monday night to experience such GLORY so here are five Christmas songs I think are worth fucking hearing. I'd say "The Top Five Christmas Songs Of All Time That You Really Must Hear Right Now!", or some other shit, but FUCKING BUZZFEED HAS KILLED THE LIST! THIS YEAR, THE LIST HAS JUMPED THE SHARK AND THE SHARK JUMPED UP AND ATE THE LIST!!!

So I will simply call this "Five Great Christmas Songs" and you can do with that what you will. Here they are as a YouTube play list.

"I wish I had a drink or maybe a dozen ..." Writing a sweet Christmas song without making it unbearably saccharine is a really hard task. It takes a songwriter and performer of the quality of Hayes Carll -- *another* Texas country singer -- to pull it off.

3) Shit Christmas Without You -- The Mighty Stef

"Sometimes love don't do the things you want it to..." The Mighty Stef is a severely -- even tragically -- underrated bluesy folksy rocking powerhouse, and this song introduces heartache, lost love and a nostalgic romanticism to the festive season. It also references song 1) in this list.

2) Christmas Card From a Hooker in Minneapolis -- Tom Waits

"Hey Charlie, I'm pregnant..." Continuing with the nostalgic romanticism, here is a great live version of Tom Waits' classic from 1978's Blue Valentine. From that great opening line to its killer final line (which I won't quote in case you've never heard it before), it is a blinder. In other Tom Waits Christmas news, here is a song by Roy Ivy that parodies a latter-day Waits style of song called "A Tom Waits Christmas".

1) Fairytale of New York -- The Pogues

"It was Christmas Eve babe, in the drunk tank..." What can be said about this asides from the indisputable fact it is not just the best Christmas song ever, but one of the best songs of all time full stop? Very little, so here is a different version by the great Irish folk singer Christy Moore.