Hello! Rodeo! I am brilliant!

Hello world! It is a little known fact about Carlo Sands that he... that is *I*... am actually the greatest rodeo rider thingy person who stays on those *totally mad* bulls the longest IN THE WORLD! TRUE STORY!

I don’t really like to boast about it, being famously modest. In fact, I would say probably I am the MOST MODEST PERSON *EVER*! TOTALLY! I AM A FUCKING *GENIUS* AT BEING MODEST!

The point is, I am a *brilliant* rodeo rider. The greatest ever. Now, *true* I have never ridden a bull. I have never even *seen* a rodeo except once briefly on TV *or* been to Texas. Like, ever!

But my statement remains accurate. You see, I can *tell*. I look at a bull and I am like “I could totally ride that! I’d be AWESEOME!” Seriously, I look in the bull’s eye... I stare right at the bull on the other side of the fence... and I just KNOW I could totally dominate that beast!

It is this feeling I get. And, as a 21st century sensitive new age male, I trust my feelings. Those fucking bulls are MINE, MOTHERFUCKERS! 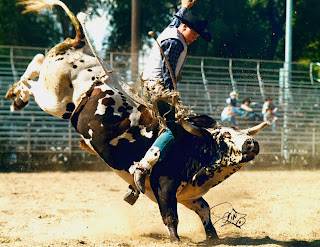 I would totally *own* any bull I chose to ride. I just *know it*.


But I simply stare the beast down and walk away. It is just one of those things. I could never *actually* get on a bull, not with my cheekbones. I have my adoring public who are obsessed with my cheekbones to think of.

I would just never do anything to risk the object of their adoration. And sometimes, the bravest thing is to walk away.

Did you know that rodeo is the official sport of Wyoming, South Dakota and Texas? Wikipedia taught me that, and if we have learned anything from the unprecedentedly severe and destructive bushfires that struck New South Wales over the past week, it is that Wikipedia is the source of all knowledge.

Anyway, did I mention out what a great a rodeo rider I am? Fucking brilliant. A natural. But I don’t like to go on about it, due to the modesty thing. 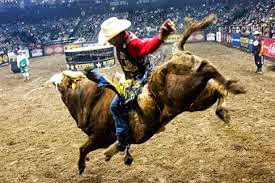