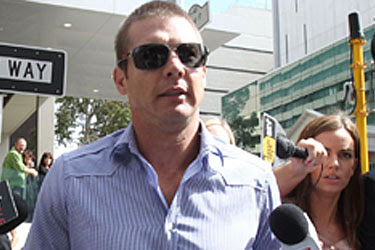 Ben Cousins has refused to comment on fresh charges laid against him after he was caught being Ben Cousins outside his North Beach home in Perth on April 17.


The news that Ben Cousins was stopped by police outside his Western Australian home yesterday, and charged with possessing less than a gram of marijuana has finally forced me to break my silence on this blog.

I have had one or two things to say about the former West Coast star and famous drug abuser in the past. So I felt what the world needs now, at this difficult time, is my clearly stated views on the matter.

This is especially crucial seeing as "Ben Cousins" is no longer trending on Twitter, and therefore at high risk of disappearing from the front of everyone's minds.

So, allow me to state as clearly and forcibly as I can that, without any doubt, the Perth cops were more than justified waiting outside the home of the fallen star until he dared showed his face outside. The threat of Ben Cousins walking the streets with a tiny amount of pot is a threat to our society so great that no amount of tax-payer funded resources is too high to stop the menace.

And it is not just in Perth that our men and women in blue are taking action. Just today, while walking walking down harsh streets of Sydney's inner-west, I saw a bloke walking past me and thought: "Hey, he looks a little bit like Ben Cousins."

Barely had the thought entered my head when a cop car came screaming 'round the corner, pulled up and two burly uniformed blokes lept out and tackled the poor bastard to the ground.

"We are from the Ben Cousins Action Squad," barked the first cop to the man being shoved onto the ground by the second cop. "And you are under arrest for walking the streets while looking Ben Cousins!"

"But I'm not Ben Cous...," the man tried to splutter before a boot in the face silenced him.

"Shut up, you sick bastard! Walking around looking like Ben Cousins! There are children nearby too! Read him his rights Serge."

The second cop, knee in back of the man who looked a bit like Ben Cousins, began: "You are under arrest for looking like Ben Cousins on a public street. You have the right to conduct an exclusive interview for an undisclosed sum with a media institution of your choosing. Anything you say may be taken down and used against you in future media reports in a bid to wring the last possible ratings out of your sordid, fucked up story."

"But I'm not Ben Cous....,"the man tried again, before a fresh boot in the face silenced him.

"Oh yeah?" taunted the first cop, waving around a tiny amount of pot in a small plastic bag. "If you are not Ben Cousins, then how do you explain the fact we just found this illicit substance in your pocket?"

"That proves it!" spat the second cop. "Only Ben Cousins would be so evil as to the walk the streets with pot in his pocket!

"What? You bastards planted that!"

"Sure, as if anyone is going to believe someone who looks like Ben Cousins," said the first cop. "Cuff him serge."

And as the poor bastard who looked a bit like Ben Cousins was cuffed and thrown into the back of the cop car, I made my way down the street, trying my hardest to look as non-sportsmanlike as possible. Luckily, in that field I'm a natural.