A rare win for humanity (Or: 'Hey mack, take the handcuffs off, I think he's a hall of famer')

Good news is all too rare in this godforsaken FUCKING world.

And now the West is taking advantage of Gaddafi's crimes and using his regime's violence against ordinary people, which the West cares so greatly about, to begin a bombing campaign already being criticised even by those who supported a "no-fly zone" for attacking civilians.

Then there is Japan, which goes to show our governments and corporations can always make a terrible situation utterly catastrophic.

It is further evidence of how we can destroy the world in one very easy step: let the rulers continue ruling.

(On a side note, I have a question for my great multitude of fans: Do any of you support nuclear power?

If you answered yes, please be kind enough to email me your names and home addresses to sands.carlo@gmail.com so I can kill you for the sake of humanity. Just stay at home and I’ll get to each of you in due course.)

And it is not like I don’t know firsthand the terrible injustices of this world.

Hell, just the other I went, happily whistling as is my quaint habit, to the fucking inner-west train station in Sydney closes to my own abode — only to find the station overrun with FUCKING PIGS.

For some reason in Sydney these days, they get actual proper pigs — not just the wannabe pigs who failed the entrance exams — to be deployed checking people’s tickets.

(I did see three of the wannabe pigs on Friday night at Central station showing why they probably deserve to be let in to the police force proper. Two of them had some poor bastard pinned to the ground as he shouted in protest while the third repeatedly kicked him.

Possibly, it might be the fact the bastard being kicked wasn’t black? You gotta get these little things right to be let into the NSW Police Force.)

But the pigs at my station were not just checking tickets. They also had a sniffer dog. At some small, pokey little fucking station at 9am in the fucking morning.

And they were there dishing out fines to people, no doubt with disappointment in their hearts that they had only found them without the appropriate train ticket and not half a kilo of smack up their arses.

My concern was simply that, this being just short of pay day, I had enough coins for a concession ticket only. And believe me, the fuckers won’t give Carlo Sands a concession card, no matter how threateningly I wave my machete.

So I had to turn around, trudge home and scour the fucking joint until I found enough ten cent pieces to make up the $3.20 I needed. Which I managed by finding the very last ten cent piece there was to be found anywhere in the house.

Then I had to trudge back and hand a very unhappy train ticket seller a big pile of ten cent pieces and then go past the fucking pigs and their fucking dog only, by now, they had given up checking tickets and DIDN'T EVEN ASK to see my FUCKING TICKET.

As a result of all of this, I was late for my meeting.

(Admittedly, I shouldn't complain as had I not found that last ten cent coin, I would have had to give apologies for the meeting on the grounds that it was impossible to leave my suburb without accepting a $200 fine... hang on, that means I would not have had to attend the meeting... GOD DAMN IT!)

I mean, what a fucking hassle. So believe me when I tell you, it's tough all round.

But, just when everything seems dark and the horror never-ending — or about to end all too soon in a horrific apocalyptic environmental catastrophe — something decent happens that reminds you that there is hope.

Hope that there is some good in the world. That it is not all bad and there can be progress.

Sometimes, our side actually wins something.

Yes, finally, the God Who Walks Among Us But Has Criminally Failed to Tour Australia Since 1979 was inducted into the Rock'n'Roll Hall of Fame. 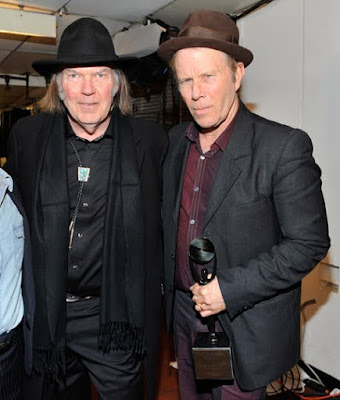 Neil Young with Tom Waits at Waits’ induction into the Rock’n’Roll Hall of Fame.

It might be argued that someone of the genius of Tom Waits, who truly seems to be able to do anything as a songwriter and musician, does not need recognition from an industry that has consistently pushed him out to the margins.

Sure, but it is a sign of something positive when the ultimate Bard of the Underdog, possibly the greatest storyteller in the history of popular music, gets some fucking well-deserved credit.

There is a common cliche when it comes to dealing with Waits, one that lets the music industry off the hook. (Neil Young actually repeats it in his intro when he describes what Waits does as "indescribable", though I have sympathy for someone trying to describe Waits at something like that.)

The idea is Waits is so "out there" that there is nothing comparable, he is total maverick, doing something so different from everyone, out there on the margins etc, etc.

There is some truth, of course, but actually, what Waits does is neither indescribable nor is it so disconnected from popular music understood broadly.

That is, he takes the form serious and seeks to use his creative powers to advance it. Which is really what artists should do.

But is exactly what the capitalist music industry has *no interest* in. More than that, it has an interest in *not* promoting this, because the safe and least offensive sells easiest.

Waits can clearly be seen to be working within the broad parametres of popular music, drawing (as Young notes) not just from rock'n'roll but blues, jazz, country and more.

But Waits both pushes the form's boundaries and uses it as a vehicle for his remarkable story-telling abilities. The music and lyrics work to reinforce each other, and the music plays the role of providing atmosphere for the stories and images he conjures with his (usually amazing) words.

Waits is far from the only artist to do this, he just happens to do it especially well.

For some reason, this is not generally what songwriters are expected to do. Filmmakers, on the other hand, are expected and allowed (within a different sets of constraints) to cover a fuller range of themes and genres.

Waits covers a broad scope of themes in his music over his nearly four decade-career that take themes ranging "romcom" (I Never Talk to Strangers, duet with Bette Midler from Foreign Affairs), "film noir" (Small Change, in which Waits appears to be channelling hardboiled crime novelist Raymond Chandler, from Small Change and Dead and Lovely from Real Gone), through to horror (Murder in the Red Barn from Bone Machine, How's it Gonna End? from Real Gone).

And a lot in between.

Any decent popular culture would not see Waits off on the margins; an eccentric, if brilliant maverick. It would seek to place the likes of Waits at its centre so other artists can build on the work done by such innovators in advancing the popular music form.

But that is something capitalist culture cannot do, because it does not care about the art form or creativity, only what it can mass produce and sell with ease.

It is in this context that any serious recognition of Waits, who is very highly regarded by other musicians, is a victory for humanity and our FUCKING RIGHT to a decent culture to help us survive ths GODDAMN FUCKING WORLD!

'Thank you, thank you. [Holding up the award] Is there a lighter version of this? ... They say I have no hits and I am difficult to work with. And they say that like it s a bad thing!' Footage of Waits being introduced by Neil Young, followed by Waits' speech.

The version of Waits' speech put up at his website ended with this line: "Someday, I hope to hear, 'Hey Mack, take the cuffs off him, I think he’s a Hall of Famer!'"

The report on Waits' website ended with this piece of news: "Meanwhile, Waits has been hard at work in his studio on his highly anticipated forthcoming album of new songs."

For christ's sake, let there not be a nuclear apocalypse right now. Not while Tom Waits is in the fucking studio.

'I'm just another sad guest on this dark earth. I want to believe in the mercy of the world again...' Waits performs 'Make it Rain' followed by 'Rain Dogs' at his induction.

I wanted to put some of Waits songs up, but it is almost impossible to pick songs, much less pick songs that give an representative overview of his astonishing output over almost four decades, so I just picked particular songs that I have always especially loved, and love almost more than life itself, or have been listening to too much of in a recent period.

The alternative songs I could have picked, and would have in any different week, are about as long as Waits back catalogue.


'But you can't take your eyes off her, get another cup of java. It's just the way she pours it for you, joking with the customers. "Mercy mercy, Mr. Percy, there ain't nothing back in Jersey But a broken-down jalopy of a man I left behind. And the dream that I was chasing, and a battle with booze. And an open invitation to the blues"'. "Invitation to the Blues", from Waits classic 1976 album Small Change, probably the best album I have ever heard.

'Is there a light up ahead, I can't hold on very long.' I would say this was the sweetest, most genuinely heartfelt love song ever written, but that would be ignoring Waits' Jersey Girl.


'The sun is up, the world is flat. Damn good address for a rat. The smell of blood, the drone of flies. You know what to do if the baby cries ... Hoist that rag!' War is fun. Let's have more of it!


'We're chained to the world, and we all gotta pull ... Ask a king or a beggar, and the answer they'll give, is we're all gonna be just dirt in the ground ' Somewhat timely, in a disturbing sort of way.


'It's harder to get rid of than tattoos.' Waits hooks up with Keith Richards to produce this.