Therapists help rich through crisis: In the good old days, they fucking jumped! 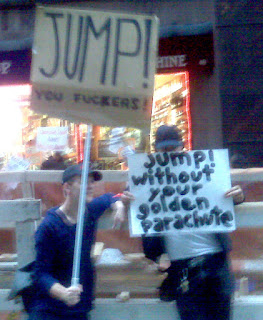 Where have I been all this time since my last post, people have been begging to know.

Well, you can stop the letters, emails, petition campaigns, video blogs and late night windowsill serenading. Especially the last one. Yes, I am talking to you, Johnny Depp.

Discretion dictates I cannot say. I will simply note I have been off performing an invaluable service to humanity.

Or so I had hoped.

Let's just say that it involved calling in all my wide-ranging contacts in the high world of finance and whispering advice (they all consider me their personal guru in financial matters as, like everyone else, they don't have a fucking clue how it works) in the ears of each one, "It's all fucked! Sell! Sell! Sell"

Standing back to watch the stunning effect as mammon crashed and burned, I waited patiently for the right moment.

It appears my plan to exterminate the parasitic greed-driven scum of a global ruling class in one fell swoop has been foiled.

I should have fucking known.

If there is one form of life that is lower than the vultures that prey on the carrion of bad debt, having bloated themselves to bursting feasting on what was once the economies of the Third World, while shamelessly eying our superannuation as a nice dessert, for whom the world's economies are nothing but a giant casino in which to drunkenly shout "double on black!", well that life form is the little leeches who are paid to make these vampires feel a little better about an existence whose only justification could be some kind of twisted historic mission to make Hitler seem like a misunderstood hippy.

Or "wealth counsellors" as it seems they prefer to be known.

My personal favourite bit is when one of these "wealth counsellors" makes the startling observation that these stock brokers "don't get a lot of sympathy from people right now".

It is not that we hate them. Hate involves emotional involvement. More like cold-hearted disppasionately despise the useless pricks.

And want to see them do the decent thing for the first time in their selfish lives, take the lift to the executive suite of their skyscrapers and, looking down carefully to make sure they don't take out an innocent pedestrian with their tumbling-to-doom sack of shit body, JUMP! 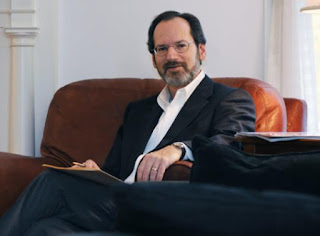 You have beaten me this time, Mr Jim Grubman, if that really is your name. Next time, Jimbo, next time...

You wont even hear me coming.